This past monday, May 4th, one of my ex-co-workers from CCS at the University of Guelph was enroute to Taipei with his sister. They were flying standby so they were forced to take a flight from Toronto to Vancouver via WestJet, then transfer onto a China Airlines flight direct to Taipei.

I worked with Tim Lee for an entire year at the IT Helpdesk. He graduated in April 2008 with a Bachelor of Science in bio-med. Anyways, if it weren’t for twitter, I would have never had known he was here.

I believe that his is far more addicted to twitter than I am! 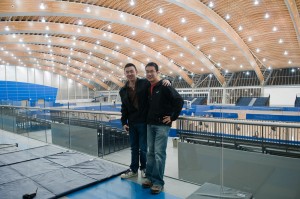 To keep this short. I whipped out my blackberry and messaged him via blackberry messenger and we quickly found something to do even though we only had about 2 hours before he needed to check-in for his 14-hour flight to Taipei.

Unfortunately it was a super wet and rainy night in Vancouver, but we made the most of it. I took him for a quick bite to eat at Hons Wun-Tun House in Richmond, then gave them a quick tour of the Richmond Olympic Speed Skating Oval on the way back to the Airport.

It was a very quick but lovely visit. Hopefully he’ll be back soon so I can give him a quick update of Vancouver’s last few year’s of construction and Olympic fever.

Tim is currently in Taipei and you can follow him on his twitter as well as his blog.

For the last month or so, I’ve been helping my friend Garret Reynolds, get his website launched for his bike-across-Canada this coming spring. He’s finishing off his M.ENG at the University of Guelph this semester. No he’s not doing this solo, he’ll be accompanied with his friend Dylan along the entire journey.

They will be starting off in Victoria, BC. (I guess you gotta start somewhere and Vancouver Island is the place!) Then they’ll head through Vancouver and make their way through the Rockies and somehow end up in Newfoundland.

Since I am from Vancouver, I’ll probably spend a few days prior to their trip giving them a hand in getting the last few things together. I believe they’re aiming to start on May 1st, 2009.

Note: I have nothing to do with his layout and design; I was only there for technical aid.